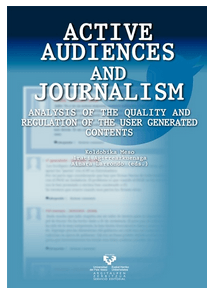 This is an abstract from a chapter of a book recently published (reference and a link to the editorial web page, at the end):

1. Object and universe of the study

Despite having a key role in digital journalism as content creators (Boyd-Barrett and Rantanen, 1998; Paterson, 2006), news agencies have not been prominent in the academic studies and analysis of cybermedia. The debate regarding the hegemonic role of the four main Western agencies, Reuters, AP, UPI and AFP, as well as the creation of UNESCO-promoted NOMIC, has taken up what little academic research about news agencies has been conducted during the last two decades (Alleyne and Wagner, 1993; Savio and Giffard, 1995; Boyd-Barret, 1998 and 2006; Esperidiao, 2011).

This lack of visibility since the Internet was created and first developed might be attributed on the one hand to its business model, which is clearly B2B, but also to the lack of determination of news agencies when the time came to position themselves and to establish their online roles. They arrived late to the Internet, where disparate and often confusing strategies were adopted. During the 1990s, agencies were resistant to the medium. For instance, Reuters did not trust the circulation of news on the Internet (Palmer and Nicey, 2012), and at the same time was establishing strategic relations with Yahoo in order to spread information through its portal (Paterson, 2006). However, this seeming invisibility coincided with one of the periods when their incidence increased the most. As a matter of fact, the creation of news aggregators and portals on the Internet at the beginning of the 2000s meant a significant increase in the presence of agency-produced content.

As indicated by Davis, (2008: 07), from 2001 to 2006 the amount of digital news originated by agencies went from 68% to 85% of total news production, although, as is characteristic of it, much corresponded to re-elaborated news whose sources were unidentified. In recent years, the transformations brought about by digitisation and convergence have also encouraged studies and reflections on the need to transform the financial model of news agencies (Muro, 2006), on the changes in the professional praxis (Czarniawska, 2011) or on the need to redefine the roles and functions of agencies in the chain of production and distribution of global information (Artero and Moraes, 2008; Johnston and Forde, 2011).

The emergence of the mobile web is accelerating the establishment of new formats for consuming information, with applications for smartphones and tablets (Westlund, 2013) notable among them. Studies conducted in the United States in 2012 reveal that 62% of traditional newspapers already have one application for mobile devices (Filden, 2012). In this context, the most important agencies are considering different strategies to find their place in this new scenario.

This study is focused on comparing the presence of the main news agencies in the mobile web. The functionalities and specifications of the different applications designed by the news agencies Reuters, Agence France-Presse (AFP), Associated Press (AP), United Press International (UPI) and Agencia EFE (EFE) for Android and iPad mobile devices will be analysed in order to determine the existence of new communication strategies.

The choice of the universe of study has been shaped by the explicit acknowledgement on the part of the news agencies of a crisis situation and of the need to radically transform and adapt their business, market and production models to the changing scenarios of convergence, connectivity and globalization.

No agency has managed to consolidate a sustainable financial model. Reuters’ information services, which are possibly their healthiest area, represent only a 10% of their financial revenue (Artero and Moraes, 2008: 63). As Muro points out (2006: 43), the sector perceives the new reality as a “diminishment of spaces”, a continuous loss of impact in areas where the activity of the agencies had enjoyed hegemonic exclusivity.

Four factors tend to concur as the main causes for this change: the creation and proliferation of press offices, the consolidation of large corporations, the characteristics and dynamics of the Internet, and the consolidation of the information continuum of global multimedia channels such as CNN or Al Jazeera. […]

The main goal of this study is to develop and test a model of analysis which allows us to perceive the manner in which each company has adopted its strategies regarding the mobile web, specifically for every product analysed. Thus, it is a proposal based on the tradition of rhetorical analysis that seeks to detect the communication strategies used by the authors of the applications when defining their foreseeable uses, functions and interactive dialogues (Freixa, 2009).

This structure aims at re-establishing, starting from the analysis of end products, the creative process which led to making the set of decisions converging on their elaboration. Secondly, the comparative analysis of results seeks to detect which elements stand out, either because of their similarity or because of their singularity. Given the same scenario, similarities between applications can provide a vision about the global one, whereas particularities allow for differentiation among the directions each agency has decided to take in order to distinguish and position itself. […]

Link to the Editorial web page of the book: http://bit.ly/1cM0OT6